Update 12/3/15: The City of Mobile Planning Commission Chair Jay Watkins announced that the vote on their proposed above ground petrochemical storage tank zoning ordinance amendment would be held over until January 7, 2016 due to the high number of holiday absences and recusals, like his attorney-advised recusal related to an ongoing ethics investigation by the Alabama Ethics Commission. 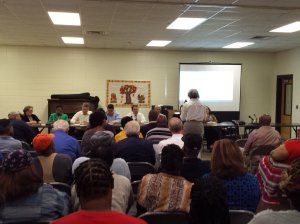 Louise Moorer: “Out here we have heavy industry, trucks, trains and you can smell the oil in our area. . . Help us build up our community. . . I say no more tanks or any hazardous chemicals in Africatown.”

December 1 was a hot night in the Robert Hope Community Center in Africatown. Attendees were using a handout of MEJAC’s critique of the Planning Commission’s ordinance to fan themselves in the hearing room as the air conditioning failed to cool the passion coursing through the hall.

The Planning Commission agreed to hold this public hearing on their petrochemical tank ordinance during the week after working hours to facilitate the participation of working Africatown community members who would find it difficult to participate during the Commission’s regularly scheduled meeting hours.

In total, MEJAC counted well over 100 people in the room. With industry representatives and Planning Commissioners present, it’s safe to say that 90-100 residents showed up to witness the proceedings with a dozen individuals speaking. It was standing room only even after additional chairs were carried into the room during staff’s reading of the ordinance’s text. 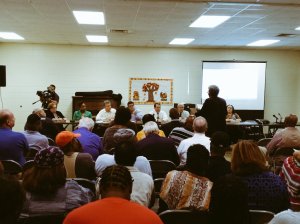 Martha Andrews Johnson telling Commissions “It is amazing how much disregard for the history of Africatown I see in this ordinance.”

Not a single Africatown resident spoke in favor of the proposed ordinance and many expressed extreme disappointment in what they felt was an utter disregard for the community’s historic significance and longing for a much-deserved process of de-industrialization. Residents are ready to end Africatown’s status as a regional sacrifice zone.

MEJAC sent its comprehensive critique of the ordinance to Planning Commissioners and Councilmembers already, but many commenters reiterated the most obvious and glaringly insensitive elements including the 1,000 feet setback from a habitable residential structure, the lack of control of toxic emissions from the storage tanks, and the historical fact that the Africatown area’s I-2 “Heavy Industry” zoning designation was determined in the 1940s and 50s well before African-American Mobilians had any elected representation or any ability to effectively negotiate with landholders and businesses operating in their community.

That last point was perhaps driven home most elegantly by MEJAC organizer Nashid Rushdan who was quoted in a Mobile Press-Register article covering the hearing:

[T]he concerns expressed by the Africatown residents pre-date the pipeline debate by decades.

Nashid Rushdan . . . said the area became zoned for industry in the 1940s when blacks didn’t have representation in city government and were unable to request restrictions on the paper mills.

“You have a moral responsibility to change the years of neglect this community has endured,” he said.

MEJAC President Ramsey Sprague noted the absence of Planning Commission Chair Jay Watkins, who also chaired the Planning Commission Subcommittee on Above Ground Storage Tanks, which was responsible for drafting the proposed ordinance. Mr. Watkins recused himself from presiding over the hearings under the advice of his attorney, as he is still under investigation for alleged ethics violations related to petrochemical storage tank conflicts of interest over the course of the last five years of his appointment to Mobile’s Planning Commission.

Howard July asks "What is it from our home that you want? Why Plateau? This is ours. . . I don't want to live around no gas or oil tanks."

MEJAC Vice President Joe Womack’s statement, in which he aggressively attacks the Keep Mobile Growing lobby group’s deceptive tactics, can be seen in the following video:

While the Planning Commissioners are presumably doing their best to sort through the massive amount of misinformation being peddled by the Keep Mobile Growing Big Oil Lobby, many are hopeful that by seeing the visceral passion from Africatown community members displayed last night that Commissioners will understand the impacts of their actions better than how it is expressed to them downtown by industry.

The Commission votes tomorrow, December 3, 2015 on whether or not to approve the ordinance as written. Despite the heated rhetoric in the hot hall of the Hope Community Center last night, there’s still time for common sense and cooler heads to prevail now that they’ve more thoroughly heard from the community most potentially impacted by their ordinance.

Written by Ramsey Sprague for MEJAC.wordpress.com